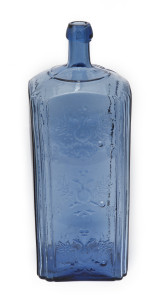 This shtof, the Russian word for vodka bottle, features the Russian Imperial Eagle and the dates 1877, 1886, and 1896, marking the increasing prestige the Smirnoff distillery achieved, including the right to use Russian coats of arms, becoming Purveyor to the Tsar, and the numerous awards received for quality and variety at international exhibitions between 1874 and 1897. The back of the bottle features the inscription “SUPPLIER TO THE IMPERIAL COURT, PETER ARSENTEVICH SMIRNOV”

Vodka, derived from the Slavonic word for water, voda, acquired a particular status living up to this root meaning. It has been said that vodka was “the elixir of life, the living water” of the Russian people, becoming both socially and economically vital.

The blue glass of the bottle plays on these water references, perhaps intending to speak to the superior purity former serf Pyotr Smirnov sought when he began distilling vodka in 1864. The quality of his product, coupled with his marketing genius and the strategic shaping of his personal image, allowed Smirnoff to become Russia’s most prestigious vodka brand. Today, the brand is equally highly regarded in the United States, providing Americans with an elixir of life of superior quality.