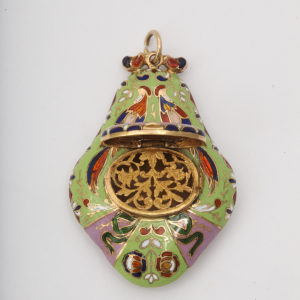 Vinaigrettes are small boxes containing sponges infused with vinegar kept beneath a perforated cover. Worn to cure fainting spells or to cure a headache, they were popular from the seventeenth- through the nineteenth-centuries. They could also provide relief from unpleasant smells by supplementing the vinegar with additional fragrances like orange, mint, lavender, rose, and spices.

Also implements of flirtation, vinaigrettes appear in Victorian literature, usually with a gentleman suitor coming to aid a faint or headache-stricken lady as seen in this excerpt from Samuel Warren’s 1841 novel titled Ten Thousand a-Year:

Then, after a moment’s pause of irresolution, he gently drew her to the sofa, and laid her down. Supporting her head and applying her vinaigrette, till a deep-drawn sigh evidenced returning consciousness. Before she had opened her eyes, or could have become aware of the assistance he had rendered her, he had withdrawn to a respectful distance, and was gazing at her with deep anxiety. It was several minutes before her complete restoration—which, however, the fresh air entering through the windows, which Gammon hastily threw open, added to the incessant use of her vinaigrette, greatly accelerated.