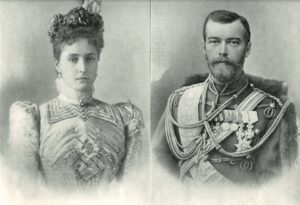 Photograph from the Illustrierte Zeitung, 1901, via Wikimedia Commons

“I never saw two people more in love with each other or happier than they are,”

wrote George, the Duke of York, to Mary in England regarding the wedding of the Russian Tsarevich Nicholas II and Princess Alix of Hesse-Darmstadt.

Some of the greatest love stories exist in history books, and the romance of Nicholas and Alexandra is quite the page turner, set against the tumultuous backdrop of the Russian Revolution.

They first met at the ages of 12 and 16, when Alix’s sister, Ella, married Grand Duke Serge, the younger brother of Tsar Alexander III. The two could not help but exchange glances.They did not see each other again until five years later, when Alix spent six weeks in St. Petersburg and they began spending more time together.

The romance, at first, was not without conflict, as the shy and awkward Princess did not make the best impression on Russian society. Nicholas’s parents, Alexander III and Empress Marie, expressed anti-German sentiments, instead having their sights set on the daughter of the Comte de Paris, Princess Hélène. But Nicholas only had eyes for Alix.

Princess Alix, torn about giving up her Lutheran faith to become Russian Orthodox, tearfully turned down Nicholas’s first proposal. Her hesitancy to abandon her faith did not last long, however, as she conceded the next day, at the convincing of her father, her grandmother, Queen Victoria, and, ultimately, her own heart.

Among the most touching aspects of their story, is their correspondence. Not long after their betrothal, Alix discovered Nicholas was keeping a diary and began writing her own entries. These included prayers, poetry, and other notes, including,

“I am yours, you are mine, of that be sure. You are locked in my heart, the little key is lost and now you must stay there forever.”

After their wedding she wrote,

“Never did I believe there could be such utter happiness in this world, such a feeling of unity between two mortal beings. I love you, these three words have my life in them.”

Such a happy and affectionate marriage lasted the rest of their lives. While they met a tragic end, in the words of Alexandra, they would

“meet again in the other world and remain together for eternity.”