The Irony of Jewelry 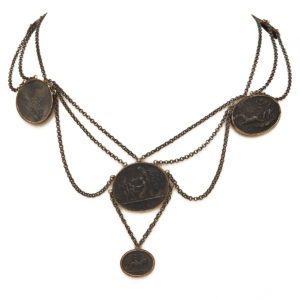 Sometimes a piece of jewelry does not need precious gems or metals to render it meaningful and special. In the early nineteenth-century, Prussians wore jewelry made of cast- iron, ironically, with great pride.

At the time of the Napoleonic Wars (1803-1815), Prussian citizens showed their support for the war effort by exchanging their gold and silver jewelry for pieces of iron adornment; hence this type of jewelry came to be called Berlin iron. The jewelry’s intrinsic value was inconsequential.  Iron, a strong and native material coming from the Prussian Royal Foundries, imbued the pieces with patriotic fervor.

Neo-classical motifs, such as cameos and acanthus leaves, dominated early Berlin iron pieces. The necklace in our collection features medallions with neo-classical scenes and dates to around 1806.

Portraits and mythological scenes used in Josiah Wedgewood’s jasperware and James Tassie’s glass pastes were incorporated into designs. By 1815, Gothic and nature-inspired motifs replaced or embellished neo-classical designs. Susceptible to rusting, they were sealed with a lacquer made of flaxseed, causing a black coating, another distinctive feature.

Berlin iron jewelry remained fashionable up to the middle of the nineteenth-century. Though initially a style wrought by nationalism, it eventually cast wider appeal, reaching consumers across Europe and in America.