Mistress and Muse, Lady Hamilton and the Maltese Cross 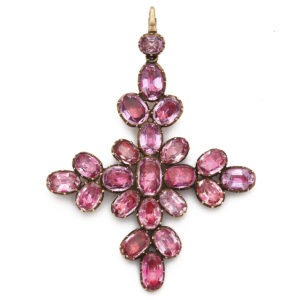 The Maltese cross originated as the symbol of the Knights of Malta, otherwise known as the Knights Hospitaller and the Knights of St. John. Because of its beautiful form, as time went on, it morphed into the popular jewel we know today. This was in great measure due to Lady Emma Hamilton, mistress of Lord Horatio Nelson, who received one in 1800 from the Russian Emperor Paul I.

She frequently wore the cross at balls and other events, and soon, Maltese crosses, worn as pendants and brooches, were in vogue, with the trend peaking in the 1830s and 1840s.  Though mainly set with diamonds, designs also used carved hardstones like agate and chalcedony. The form evolved over the years in accordance with current fashions, but never becoming unrecognizable. Our diamond Maltese cross is an example of the liberties taken with evolving nineteenth-century fashion. 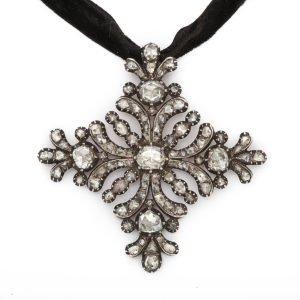 Lady Hamilton’s life was a succession of scandals. Her origins as a courtesan, coupled with her reputation as a woman “no man can resist” rendered her not highly regarded in English society. Quite beautiful, she was the muse of many artists. In fact, she is thought to be the most painted woman in all of British history. Mistress and muse, history acknowledges her with another term: trendsetter.