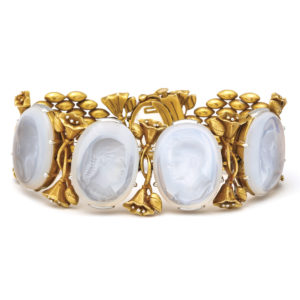 This 18k gold and moonstone bracelet speaks to Benton’s artistic appreciation. A gift to his wife, the five moonstones feature carved intaglios of Benton and his four children (Charles, John, Helen, and Louise). That these moonstones are so exquisitely carved demonstrates remarkable craftsmanship. Moonstones are as popular today as they were then and are typically cut en cabochon.

Also of note: by calling this “the Benton bracelet,” we refer to both patron and artist. The intaglios were carved by Benton’s cousin, esteemed gem carver Beth Benton Sutherland. She specialized in intaglios carved in moonstone and had a reputation as the best portrait carver. She was particularly known for her skill in capturing the countenances of children and her carved portraits were highly coveted. She began collaborating with designer Izabel Coles in the late 1920s, a partnership that lasted into the 1960s. Their work was exhibited in many museums, including the Metropolitan Museum of Art, which still has one piece on exhibit: a carved moonstone of philanthropist Edward S. Harkness, made as a gift to his wife in 1929.

While Benton Sutherland made lasting impressions quite literally through her art, Senator Benton also left his mark on the world.  During his term he was among the first to speak out against Senator McCarthy, which ultimately led to McCarthy’s censure in 1954. Outside of politics, the bibliophile, media guru, and art collector had an industrious career in both advertising and publishing, shaping media as we know it.  He introduced sound effects and other innovations to radio programming, and Encyclopedia Britannica achieved unprecedented success under his direction.

A longtime benefactor of the University of Connecticut, the school renamed its art museum in Benton’s honor in 1972.

History comes full circle with Benton’s intaglio bracelet, sealing the memory of a noted patron and collector at ALVR.