ALVR Blog: Fabergé and the Red Cross, an Enduring Symbol

Our hearts go out to everyone during this difficult time, and we hope you are all staying safe and healthy. We look forward to welcoming you back into our gallery when this is all behind us. Until then, we intend to brighten your day with highlights from our collection on social media and the ALVR blog. 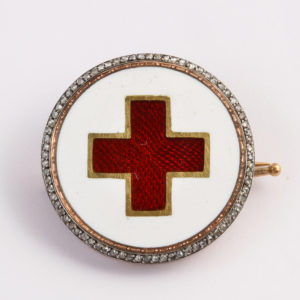 Recently, the US Navy hospital ship, the USNS Comfort, arrived in New York Harbor. The sight of this massive white ship emblazoned with red crosses is a powerful symbol of hope in this trying time and reminds us of other periods of history when this emblem held particular significance. One Fabergé piece in our collection tells the story of such a time: a Red Cross brooch made at the time of the Great War.

This brooch features a red guilloché enamel cross against a white ground. It was likely awarded to an aristocratic lady in appreciation for her contributions to the war effort. That the brooch is encircled with diamonds suggests it was made for someone of particular importance.

At the onset of WWI, Russia was in great need of nurses. This need was so great, that the year-long training period was condensed to two months. In patriotic fervor, women from all classes answered the call to become sestry miloserdiya, sisters of mercy, as nurses were called in Russia. These volunteers included the wives and daughters of government officials, teachers and other professionals, and aristocratic ladies.  At the helm were the Romanov women.

The Russian Red Cross was established in 1867 by Emperor Alexander II. Initially called the Society for Care of the Sick and Wounded, in 1879, it was renamed the Russian Society of the Red Cross. At the time of the Great War, it was led by Dowager Empress Maria Feodorovna, who had been president of the Russian Red Cross since the beginning of her husband’s reign. When her son Nicholas ascended the throne, she refused to cede her presidency to Alexandra, but did eventually permit her to contribute in her own way. Alexandra and her two eldest daughters, Olga and Tatiana, volunteered to become nurses. In their new role, they became known as Sister Romanova, numbers 1, 2, and 3. While the two younger daughters were too young to train, Grand Duchesses Maria and Anastasia offered their support as hospital visitors.

In addition to caring for the wounded, Alexandra opened numerous supply depots that produced medical dressings and also collected and distributed non-perishable food, clothing, pharmaceutical supplies, and other items. Palaces and other buildings were converted for caring for the wounded. By the end of 1914, she was patron of 85 hospitals throughout Petrograd.

Alexandra and her daughters traded their royal finery for nurse’s uniforms in an effort to bridge the gap between themselves and their subjects. At this time, Fabergé’s artistic output also reflected austerity efforts, producing simpler pieces, and eventually, offering his workshops for making munitions. Though simple in design, this Fabergé Red Cross brooch makes a strong statement, recalling a time when people came together to overcome difficult circumstances.

The Red Cross has long been a reassuring image of protection and benevolence, a symbol of hope and care, today and yesterday. We thank all our healthcare heroes working on the frontlines of this pandemic.