ALVR Blog: The Legend of Sadko

Once upon a time, in late nineteenth century Russia, there was renewed interest in Russia’s past, and with that, a fascination with Russian fairy tales. This fascination transcended all art forms, from literature and theater to decorative arts. A ceramic charger in A La Vieille Russie’s collection brings this fairytale dream world to life. Executed in the Art Nouveau style, it features scenes from the eleventh- century Novgorod legend of Sadko.* 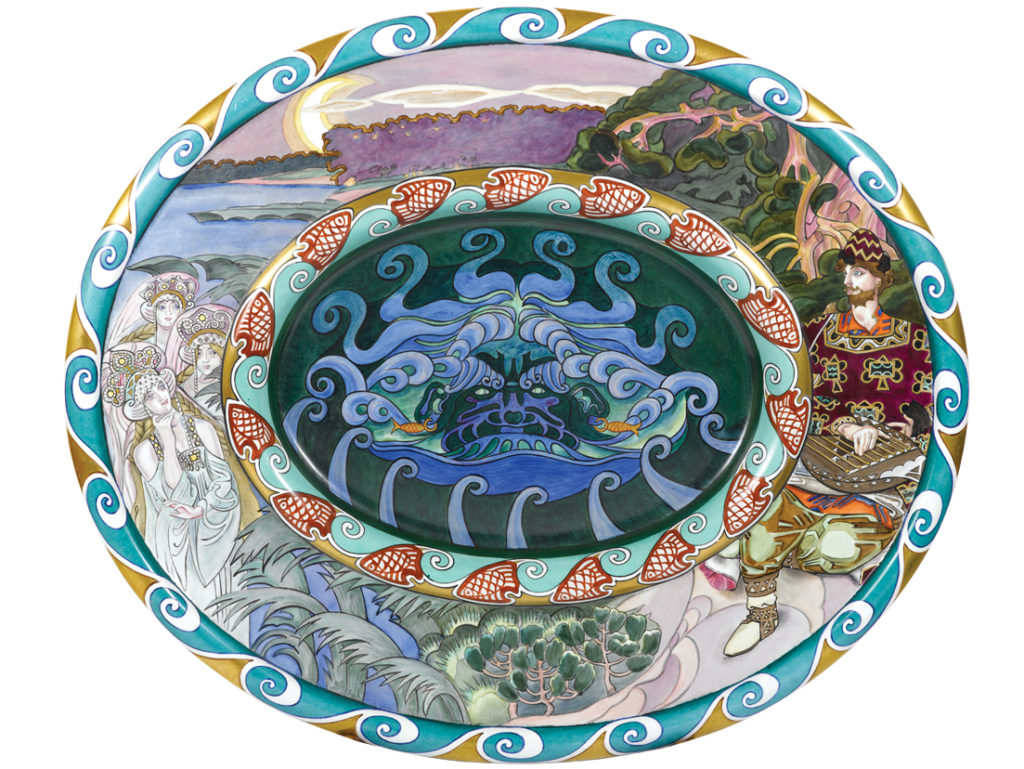 The oval central section depicts a grotesque octopus-like creature, the rim with Sadko on the right, playing a stringed instrument to three women (left) in diaphanous gowns and jeweled headpieces, on a moonlit shore, with bands of stylized motifs. Designed by Mikhail Vrubel and made by the Kuznetsov Porcelain Factory for the Imperial court.
Russian, 1889-1900.
Width: 28-1/2 inches; height: 24-1/2 inches

As the legend goes, one day a lonely and melancholic Sadko serenades the River Volkhov, proclaiming, “Rich man, poor man—it’s all the same to you. If only you were a woman! I’d marry you and live with you here in the city I love.” His music reaches the bottom of the river, so charming the King of the Sea that he rises to the river’s surface to invite Sadko to play at his palace feast.  As a reward, the King gives Sadko a fish with golden scales.

“Your Majesty, you are too generous!”

“Say no more about it! said the King. “Music is worth far more than gold. If the world were fair, you’d have your fill of riches!”

Sadko quickly sells the golden fish before commencing his journey to the palace deep beneath the ocean waves. Once there, Sadko’s music pleases the King of the Sea so much that he offers one of his daughters in marriage. Sadko chooses a bride, but is warned by the Queen that the slightest embrace will trap him beneath the sea forever, never to return to his beloved Novgorod. With this in mind, Sadko resists the Princess’s charms and awakens to find himself back in Novgorod.

Was it all a dream? Who knows? Sadko lived a good life in Novgorod – he became a wealthy merchant, married, and raised a family. While life was good, he never really forgot what lay beneath the River Volkhov.

“Sometimes still on a quiet evening he would walk out of the city alone, sit on the bank, and send his tinkling music over the water. And sometimes too a lovely head would rise from the river to listen—or perhaps it was only moonlight on the Volkhov.”

Legend has it that the Princess of the Sea can be seen at A La Vieille Russie, where the unusual is usual.TM See her for yourself, for more than an ephemeral glance, at 745 Fifth Avenue.