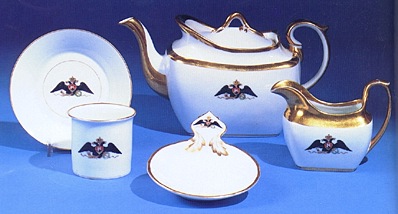 Various pieces from the an imperial service decorated with the old-style coat-of-arms. From Gatchina Palace.

During the eighteenth and nineteenth centuries ceremonial dinners in the imperial palaces were virtually affairs of state. Tables were set in several halls at once, the number of guests often exceeded several hundred persons, and menus could contain dozens of dishes. This required extensive stores of services, each with an enormous number and variety of pieces, and the country’s best creative resources were engaged to make these services, whose cost reached significant sums. Preparation of such services took several years, and their creation marks a high point in the history of Russia’s applied decorative arts. Porcelain was widely used to decorate the Peterhof palaces, which were constructed from the plans of Peter the Great. For example, the Lacquer Study in Monplaisir exhibited the entire collection of Chinese and Japanese porcelain on special pedestals. In Peter’s time, palace tables were set with oriental porcelain, silverware, earthenware and pewter. Early pieces from Europe’s first factory, at Meissen, found their way to Peterhof, and at the end of the nineteenth century, a Boettgerware table service was found to have been presented to Peter the Great in Germany in 1716.

The Imperial Porcelain Factory gave evidence of attempts to imitate the decoration of imported oriental porcelain during its first stage of development, as was the case with the early products of Saxon porcelain workers. Nonetheless, the first tea service prepared for Elizabeth in the middle of the eighteenth century is striking not only for its technical perfection, but also for the originality of its decoration, and it testifies to the factory’s successful search for its own artistic individuality.

During the first years after Catherine the Great’s ascent to the throne, the Imperial Porcelain Factory continued to work with rococo forms, perfecting its production techniques and developing more complex decorations. But gradually, under the influence of the established classical style, decorations became light, geometrically precise, and each object’s form acquired emphasis without destroying its tectonics.

The Guriev Service, created during the flowering of the Empire style, embodied the best forms of this style: monumentality of form, brilliant control of the synthesis of art forms, and an understanding of the ensemble. Intended for ceremonial receptions, the service represented a picture of Russia in painted images. Leading craftsmen of the Imperial Porcelain Factory participated in creating the service. The Guriev Service was the last ceremonial service without a fixed address, going first to the Winter Palace, and then in 1848 to Peterhof.

Begining in 1823 the Imperial Porcelain Factory began the regular production of services designed for specific Imperial Palaces, old as well as newly built. The second quarter of the nineteenth century marked a decline in the Empire style. Romantic attitudes and the search for new art forms found expression in new services designed for specific palaces.

The 1840’s marked a renewed interest in classical art, perceived largely though the prism of the excavations at Pompeii. Visits there by the Russian Tsarevich and his wife, as well as other Russians inspired creations “in the Pompeiian manner.”

In addition to richly decorated services, and in order to preserve them, the Imperial Porcelain factory created “everyday” services for the imperial kitchens. Simple, utilitarian, with a depiction of the coat of arms of Russia, they were produced with small variations for use in all the imperial palaces. The Imperial Porcelain factory also produced services for imperial yachts, which constantly shuttled between Petersburg and Peterhof and were stationed for long periods in the harbors of the Lower Park and Alexandria.

A Danish technique for painting under glaze became widespread throughout Europe at the end of the nineteenth century. Not only did it display new artistic properties, but the paint did not wear off with the objects use. This period of the Imperial Porcelain Factory was marked by an increase in artistic quality and by brilliant technological advances. One example is the last of the imperial services, ordered in 1904 for the Empress Alexandra – the “Purple” service.

During the nineteenth century – the age when Russian ceramic production flourished – a large number of factories and works were opened throughout Russia. The artistic level of the several private factories was sufficiently high to allow ordering additions from them for services at imperial palaces. This was the case, for example, with the Kornilov Brothers Factory. The quality of these products was at times extremely high and their decorative concepts were not without elegance. However, only the best services of the imperial palaces, prepared at government order by the nation’s best efforts, represent the most brilliant examples of Russian decorative art.