His Majesty’s Own Service from the Cottage Palace 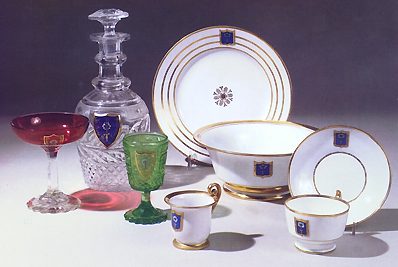 pieces from His Majesty's Own Service from the Cottage Palace in the Alexandra Park at Peterhof: glassware, silver and porcelain.

Intended for the Cottage Palace in the Alexandria Park at Peterhof. All pieces are decoarted with the coat of arms of Alexandria, which was created by the poet Vasilli Andreevich Zhukovsky, the tutor of Alexander Nikolaevich (the future Alexander II): a gold sword on a blue shield placed through a wreath of white roses with the motto “For Faith, Czar, and Fatherland.”The service includes dinner, dessert, and tea sets, amd also crystal which was produced at the Imperial Glasss Factory in St. Petersburg. The service originally included 530 pieces, and in 1835 its size was doubled. Additions were produced until the begining of the twentieth century 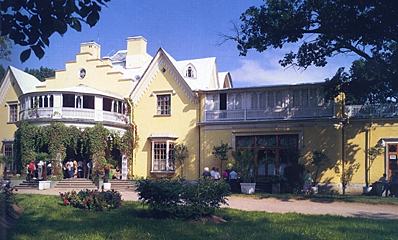 The Cottage Palace in Alexandra/Peterhof.