The Guriev Service set out in the Yellow Room of the Catherine House of Monplaisir Palace.

Decorative porcelain is justifiably considered the pride of Russian national culture. As one of the oldest in Europe, in terms of its founding, Russian porcelain production has given the world a multitude of works which, although created in the mainstream of general European culture, bear a striking individuality of form and decorative technique. Russian porcelain is easily identified and remembered, and its traditions have not disappeared even today. Services and table decorations comprised the basic part of porcelain products of the greatest ceramic factories in St. Petersburg as well as in the provinces. The most magnificent, of course, were the services prepared at the order of the imperial court, whose purpose and formal themes often bore official state significance.

The finest craftsmen were employed in the creation of these services which were made to order and which at times comprised an entire epoch in the history of national porcelain factories, which fact lends particular value to these beautiful works of art surviving to this day. The richest repositories of Russian services are the palace museums of the former summer imperial residences near the Russian capital, St. Petersburg. Among them is Peterhof with its multitude of palaces and pavilions.

This online exhibition of imperial porcelain will assist those interested in Russian art to appreciate more fully the wealth of its artistic heritage. The exhibit has been made possible in large thanks to A La Vieille Russie, which has contributed greatly to the study of Russian art and its popularization, and thanks to the personal efforts of Mr. Paul Schaffer. 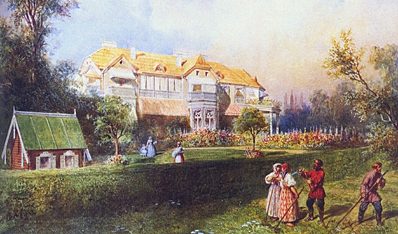