Cluster ring of three natural colored pearls in varying shades of black, set in a diamond and platinum mount. 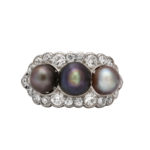 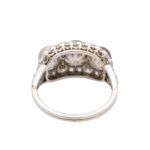 Cocktail Rings – Glitter on the Rocks with a Twist

Prohibition era (1920-1933) cocktail parties rekindled a love for statement jewelry as part of a new genre of festive adornment consisting of cocktail dresses, aprons, hats, and, of course, flashy cocktail rings. Our collection includes a range of examples from the Art Deco era to the later twentieth century. The taste for these party rings continues on today, often as a favorite accessory on the red carpet.

Women attending cocktail parties showed off the new fashions, and in doing so, their newfound liberties. Often bought by a woman for herself, cocktail rings were a testament to a woman’s increasing autonomy and individuality.  One can easily imagine an elegant, au courant lady tapping her glass while wearing our Art Deco diamond and sapphire pinky ring. An oversized cocktail pinky ring such as this could easily be worn on either the right or left hand. 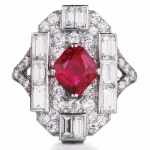 Our 1930’s diamond cocktail ring in the form of a shield with a ruby in the center reflects the predominant taste for ‘white’ jewelry – the effect of diamonds on platinum, but the central ruby adds just a touch of flare. 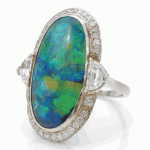 Our 1950’s black opal and diamond cocktail ring makes quite the statement. The oblong form of the ring is well suited to be worn on the pointer finger and could never be confused with one intended to signify betrothal. 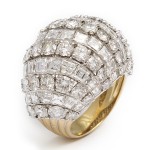 Our 1960’s diamond bombe ring embodies Cartier’s assurance as a seasoned jewelry house in both their designs and materials. The oversized diamond ring has over 12 carats worth of diamonds but it is more than just a display of intrinsic value – the traditional bombé form is elevated by the subtle striping of the princess and round-cut diamonds.

The cocktail ring transformed over the decades into the perfect statement piece suitable for all occasions. We have many styles to choose from, everything from aquamarines to entirely diamond rings. Please feel free to either come by the gallery to see our entire selection or email us! 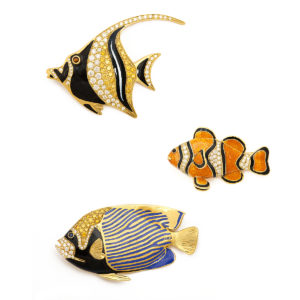 Outside of a select circle of artists, jewelry aficionados and world-class violinists, the name Henryk Kaston probably does not ring any bells. Children and their parents, however, know the names Nemo, Marlin, Dory, and Gill, the world over thanks to the enormously popular 2003 Disney/Pixar film Finding Nemo. The characters have since become synonymous with their respective species but two decades before they were swimming on the big screen as animated art, Kaston gave them just as much life and personality as wearable art in dazzling precious materials.

Kaston’s Clownfish brooch is rendered in gold with bright white diamonds and black enamel stripes. The precise proportions and minute details, such as the golden scales visible through the bright orange guilloché enamel, attest to his extensive research in marine biology. Kaston’s Emperor Angelfish (Pomacanthus imperator) is rendered in gold with a cabochon sapphire eye, warm yellow diamonds, bright white diamonds, vibrant royal blue and black enamel. While the forgetful character of Dory (voiced by Ellen DeGeneres) was a Pacific Regal Blue Tang, their flat, wide form as well as their coloring is very similar. It is easy to see why both the animators as well as Kaston were drawn to these similar fish species. The Moorish Idol (Zanclus cornutus) aka Gill (voiced by Willem Dafoe) has been one of the most iconic coral reef fish as it is a favorite of photographers and bathroom decorators alike. Kaston’s Moorish Idol rendered in gold with a tiger-eye, warm yellow diamonds, bright white diamonds and black enamel is striking in both its coloration and bold form. The dramatic crested dorsal fin is an attractive form that catches the eye, be it animated or bejeweled.

As a young man with only $5 in his pocket, Henryk Kaston emigrated from Poland to New York City during World War II. He went on to become a violinist with the Metropolitan Opera, an inventor, one of the finest bow-makers of all time as well as a master jeweler.  The ever-modest Kaston once recalled “I’m not really sure that I want to be known as just a bowmaker or a jeweler or a violinist. All these things are equally important to me; but I’ve never felt a need to advertise myself”.  Regardless of the medium, his talents are evident in his refined work. While the musical instrument community chided Kaston for not solely devoting himself to bowmaking, his friend Salvador Dali, the world renowned surrealist artist and master jeweler, encouraged him to also focus on creating fine jewelry.

Kaston produced a limited collection of Dali’s earlier fine jewelry designs, most notably the iconic crying eye, honeycomb heart, the Marilyn Monroe lips and the Tristan and Isolde brooches. The Dali jewels are Kaston’s most well known pieces of jewelry, but as these fish brooches attest, he was much more than just a producer of someone else’s designs. 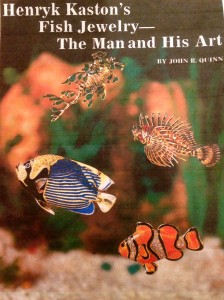 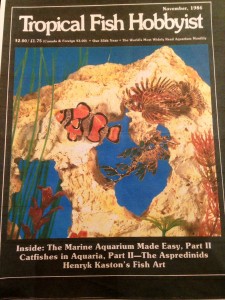 In their extensive research, the Pixar team surely came across the work of Dr. Herbert Axelrod and his publication The Tropical Fish Hobbyist.  The world-renowned scientist and tropical fish expert started the publication in 1952 and it continues on today. In the early 1980s, Dr. Axelrod gave Henryk Kaston many books on tropical fish for him to peruse. The vibrant beauty and natural grace of the exotic fish inspired Kaston to again turn his expert hand towards jewelry. He scrupulously studied the nuances, patterns and characteristics of the fish that he found the most captivating. Axelrod applauded Kaston’s bejeweled fish and in 1986, three of his brooches, photographed in an aquarium, graced the cover of the November issue of TFH.

The playful but shy nature of the Ocellaris Clownfish (Amphiprion ocellaris) aka Marlin (the fretful father voiced by Albert Brooks) and Nemo (the rebellious yet loving son voiced by Alexander Gould) inspired the story of Finding Nemo. Andrew Stanton, the co-writer and director of the film had always been drawn to marine life and had toyed around with the idea of creating an animated underwater world for years. The plotline fell into place when he later came across a photograph of two Clownfish peeking out from an anemone in an issue of National Geographic. They appeared to be playing peek-a-boo and Stanton was enthralled. We will never know if the Clownfish also served as the initial inspiration for Kaston’s line of fish jewelry, but of the thousands of species of tropical fish, it is notable that both Kaston and the Pixar animators were drawn to the Clownfish, the Angelfish and the Moorish Idol. Despite the vastly different mediums, both Kaston and the Pixar animators achieved the perfect balance of faithful biological representation while giving each fish a distinct and charming personality.

Keeping it (Sur)real: The Jewelry of Salvador Dali 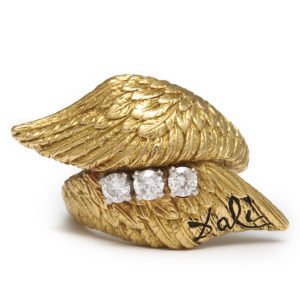 Most are familiar with the Surrealist paintings of Salvador Dali, but few might be aware of the full range of his artistic expression. Among his many artistic endeavors, he designed jewelry.

Concerned about jewelry being less appreciated for its artistic merits and more so for the quality of gems and metals, Dali sought to revive jewelry design as an art form, thinking of the Renaissance artists who did not confine themselves to a single medium. He said:

“My art encompasses physics, mathematics, architecture, nuclear science – the psycho-nuclear, the mystic-nuclear—and jewelry – not paint alone. My jewels are a protest against emphasis upon the cost of materials of jewelry. My object is to show the jeweler’s art in true perspective – where the design and the craftsmanship are to be valued above the material world of the gems, as in Renaissance times.”* 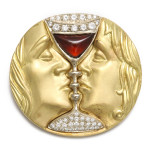 Dali selected materials based on impression, as well as color and quality. Each piece was made with meaning. The Tristan and Isolde brooch, for example, has their heads arranged to form a goblet, suggesting “the effluence of love possible between a man and a woman.” The ruby lips brooch was first modeled after Mae West, and later, Marilyn Monroe, and were inspired by the poetic cliché of ruby lips and teeth like pearls, which Dali found fitting inspiration for his surrealist jewelry.

Ultimately it is the viewer, Dali believed, who completed each composition by giving the pieces life. Dali’s perspective on jewelry can teach us a lot about how to interpret his work. Just as importantly, we must remember to appreciate jewelry for more than the intrinsic value of gems and metals, but for their beauty and artistic merit as well.

*Source: Art-in-jewels by Salvador Dali: The Collection of the Owen Cheatham Foundation 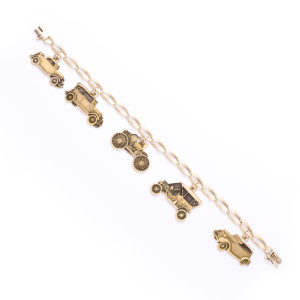 This bracelet features five gold and enamel charms depicting various Ford motorcars, the reverse engraved with each model’s name, dates, and production numbers. The link bracelet is by Tiffany & Co. and the charms are by O. C. Tanner, a Salt Lake City firm established in the 1920s.

While a student at the University of Utah Obert C. Tanner began selling high school and Mormon seminary class pins, soon expanding to include high school awards and club pins. In 1945, the company branched out to include employee recognition awards, a novel idea at the time. Tanner managed to persuade corporate executives to see the benefits of such awards, arguing that ‘recognizing and motivating employees with beautiful, quality emblems would promote better employer/employee relations.’

We have yet to encounter similar bracelets and welcome any commentary. Have you seen anything like it before?