Unusually large cushion-cut aquamarine weighing approx. 22.50 carats with three baguette diamonds on each side. Mounted in a platinum cathedral setting with a scroll motif in the gallery and split prongs. 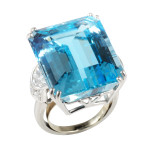 Gemstones come in traditional colors. However, these “traditional” colors are usually not the only colors that exist for these gems. Often some of the most interesting colors are used in antique jewelry.

A corundum by any other name is still a corundum when red, it is called RUBY. When it is blue, it is called SAPPHIRE. Sapphires need not, however, be blue – any color of the rainbow will do except red. Corundum also can have a natural ‘star’ in it depending on the angles of the silk-like inclusions. Shown here are many of the varieties of corundum. The ruby contains chromium and aluminum while blue sapphires contain titanium and iron. Iron and aluminum will give the sapphire yellow, and purple sapphires have chromium, titanium and aluminum

A garnet – in any other color – is still a garnet – when it is red, it is understood. However, in the nineteenth century (during the reign of Alexander III of Russia 1881-1894) the green variety was discovered and was called ‘demantoid’ (demon-like) because they thought that the devil had changed the color. (The most popular myth for the origin of the name is ‘diamond like’, something quite far from actuality.) This green is due to calcium and iron. Today there are other green varieties as well as other reddish varieties such as the ‘hessonite’ shown here (upper left). The hessonite garnet contains calcium, the pyrope contains manganese and the almandite contains iron. 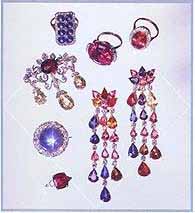 A diamond is a diamond is a diamond – and is probably one of the most commonly used gems in jewelry manufacturing through the ages. However, as can be seen from the pieces shown here, the color can be dramatically different. You can have bright yellows to black to green, blue and even pink and red. The colors of diamonds are seemingly endless. When nitrogen is present, you get a yellow diamond; and when you have boron, you get a blue diamond.

Pearls – coral – turquoise – topoz – spinel – shown in the picture. There are numerous other materials which man has used throughout time; these include turquoise used in both the snake necklace (English circa 1845) and the diamond cluster ring (English 1880). Turquoise was popular not only in Europe (usually Persian in origin) but also in the United States with the ever increasing interest in Native American and Hispanic cultures – especially in the Southwest. 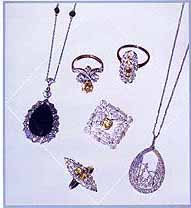 The seas have also provided us with materials which have been widely used, and still are to this day. These include, among others, coral, which is the skeletal remains of a sea animal colony built up from calcite with a color that can vary from light to dark orange to red. The example shown here is a coral and diamond brooch carved as a rose (English circa 1885). Another example is the scarab brooch, which comes from Russia at the end of the 19th century. The pearl also comes in a variety of colors and shapes. This is shown by the two necklaces of golden pearls pictured bottom right. The different colors of pearls are caused by impurities that can exist in the water. The shape of the pearl itself is also not always uniform, and sometimes a piece of jewelry is created around this baroque shape. An example of this is the snail brooch (English circa 1950). The other type of pearl shown in this picture is the ‘pink pearl’ or ‘conch pearl’. These pearls come from the conch shell mollusk around the Florida Keys, producing pearls like the ones used in the marquise shaped diamond cluster ring (English circa 1890). 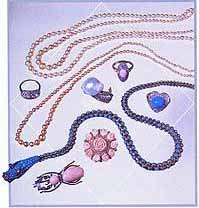 The spinel was for many years confused with the ruby and known as ‘spinel rubies’. The reason is that they are found with the corundum gems in the gravel beds of Burma and Ceylon. Spinel also comes in a variety of colors including orange, yellow and blue, however, the most prized color being a transparent red. (Square-cut spinel and diamond ring)

Topaz, or precious topaz as it is sometimes known, is the color of sherry wine and was widely used during the Victorian period and earlier. It also comes, rarely, in a rich red color (diamond cluster ring).

Beryl: aquamarine and emerald are two varieties of this stone. Both are beryl, as is a wonderful pink variety called ‘Morganite’.

Therefore, a ruby is to a sapphire as an emerald is to an aquamarine! 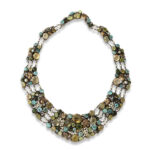 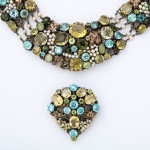 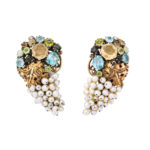 Arts and Crafts earrings made of natural seed pearls and mixed gems, including citrine, aquamarine, topaz, and alexandrite, set in gold and gilded silver. These are part of a suite including a necklace with removable pendant brooch. 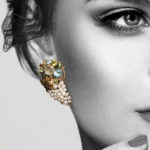