Snuff taking was exceedingly fashionable throughout the 18 th century in Europe.  Therefore, snuff boxes and snuff taking accessories of all types and quality were produced – ranging from Sheffield plate boxes, to sterling silver boxes to gold boxes with gem stones and enamel miniatures, in each country’s own decorative tastes, and reflecting the period’s styles (Louis XV or Louis XVI for …

A Micro History of Miniature Mosaics 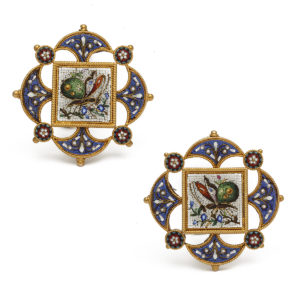 After Napoleon’s 1814 defeat, Europe became open to tourism once again. Italy was the most popular destination, where tourists flocked in pursuit of works of art. Souvenir purchases often included copies of masterpieces and also jewelry in the form of cameos, intaglios, and, most notably, miniature mosaics.

A miniature mosaic is a composition of tiny, glass tesserae cut from pieces of glass known as smalti filati. Some tesserae are not glass, but stone. Miniature mosaics are also known as “micromosaics,” a term coined by avid collector Arthur Gilbert. His collection of mosaics, among other treasures, were originally housed at LACMA, but have found a permanent and prominent home in the collection of the Victoria and Albert Museum.

Making a micromosaic entailed arranging tesserae in mastic or cement on glass panels with tweezers. Once the composition was complete, the gaps within the arrangement were filled with colored wax and the surface polished. Some of the finest miniature mosaics can have as many as 5,000 tesserae per square inch.

Micromosaics date to the eighteenth-century, inspired by the larger, interior mosaics of ancient Rome. They are still made in the Vatican workshops to this day.  Earlier micromosaic pieces lacked perspective and revealed visible spaces between tesserae.  Later artists achieved more realistic works, like the renowned Antonio Aguatti. His technical improvements made more realistic micromosaics possible and he is considered one of the leading Roman micromosaic artists from the early nineteenth-century. He made the micromosaic mounted in this snuffbox: 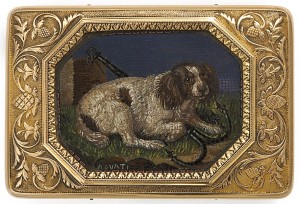 Many micromosaics were purchased as panels and mounted into box lids or jewelry upon a traveler’s return home. The most popular motifs were the buildings and ruins of Rome, landscapes, animals (mostly birds), and flowers.

They ranged in scale, from snuff boxes and jewelry, to large tabletops and replicas of full-sized canvas paintings. In fact, when Arthur Gilbert brought his first micromosaic home to show his wife, Rosalinde, she famously thought it was a cracked painting. Little did she know it was the first of many that would amass one of the world’s finest collections.